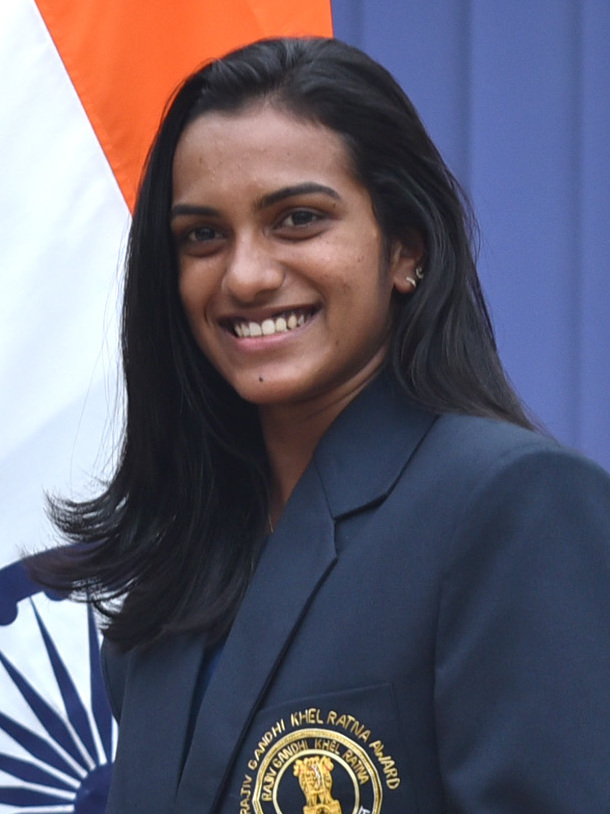 Pusarla Venkata Sindhu (born 5 July 1995) is an Indian professional badminton player. Over the course of her career, Sindhu has won medals at multiple tournaments including Olympics and on the BWF circuit including a gold at the 2019 World Championships. She is the first Indian to become the Badminton World Champion and only the second individual athlete from India to win two consecutive medals at the Olympic Games. She rose to a career-high world ranking of no. 2 in April 2017.

Sindhu broke into the top 20 of the BWF World Ranking in September 2012, at the age of 17. Beginning in 2013, she won a medal at every world championships, with the exception of 2015. She is just the second woman after Zhang Ning to win five or more medals at the world championships. She represented India at the 2016 Summer Olympics (Rio), becoming the first Indian badminton player to reach a final. She won the silver medal after losing out to Spain's Carolina Marin. She made her second consecutive Olympic appearance at the 2020 Summer Olympics (Tokyo) and won a bronze medal, becoming the first Indian woman ever to win two Olympic medals.

Sindhu won her first superseries title at the 2016 China Open and followed it up with four more finals in 2017, winning the titles in South Korea and India. In addition to that, she has won a silver medal each at the 2018 Commonwealth Games and 2018 Asian Games, and two bronze medals at the Uber Cup.

With earnings of US$8.5 million and $5.5 million respectively, Sindhu made the Forbes' list of Highest-Paid Female Athletes in 2018 and 2019. She is the recipient of the sports honour Major Dhyan Chand Khel Ratna, and India's fourth highest civilian award, the Padma Shri. She was also honoured with Padma Bhushan, the third highest civilian award in India, in January 2020.